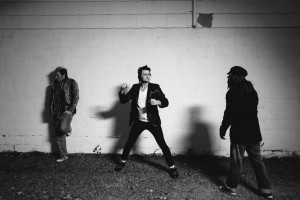 Just another band from outer space.

Saturnine Hello is a well polished hint of all things you love about Rock n Roll.  The diverse backstreets and alleyways of sounds that the band takes you on, harkens back to the glory days of what was once your innocence.  True, gritty, passionate songs, with a modern feel and a nod to the past as Saturnine Hello looks to the future.

The sound has been described as, “if Motley Crue and the Goo Goo Dolls had a baby on Mars, it would be Saturnine Hello.”  Our playlist ranges from stark and ambient to raucous, aggressive rock. The focus of the band is writing great songs, releasing quality albums, and putting on an entertaining and passionate show.

We just released our new EP “Just an Outsider” on disc and will be released on iTunes, Amazon, and a variety of other web media forums. “Young Punks” was released internationally in 2013 and is also available online. Previous releases include the “Sometime Galore” LP released in 2010 and “Motor City Love” in 2004.

Saturnine Hello has been performing as a three piece band in the midwest for over ten years. We’ve opened for national acts such as Brett Michaels, Wednesday 13, Sponge, Vince Neil and opened for the Viva La Bam Tour. Between big shows we frequently play smaller venues to our core fan base. In the summer of 2014 we played at Ohio Bike Week and we’ll be back to play Ohio Bike Week 2015.

No shows booked at the moment.